The first week of term was incredibly hectic, as per usual in Oxford. It started with a bad hangover – the second in my life, my liver is pretty tough – from overindulging in the College Ball, which didn’t exactly prove very helpful to my trying to write two essays in about three days.

Nevertheless I wrote a pretty good one about Rilke. So good, in fact, that I had one of my best ever tutorial experiences where the tutor made me Rooibos tea and we had a genuine discussion – not a mere repetition of the critics or dissection of my essay – and it ended with him asking me if I wanted to do an Extended Essay on Rilke, which I’m still thinking about. He had four large trees in his beautiful office and I left feeling incredibly inspired. 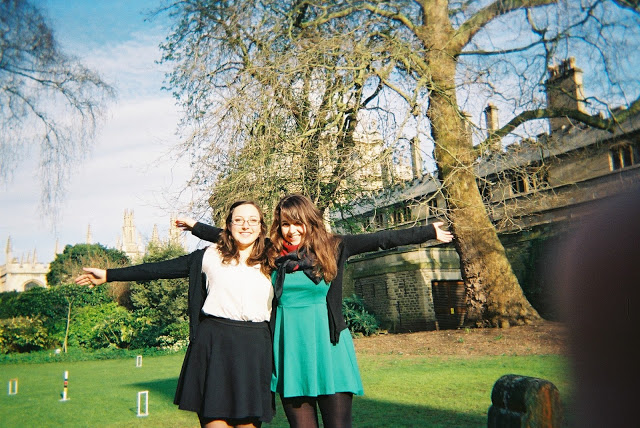 Ellie visited me this week … such a treat!

The other highlight of the week was an immersive cinema event which two of my friends – Edd and Owen – had arranged. Immersive cinema, if the concept is somewhat unfamiliar to you, involves recreating the mood and feel of the movie to whatever extent and then watching the movie communally. Owen and Edd, working under the name of their company Hacked Off Films, have hosted Short Film Festivals before in addition to two successful immersive cinema events and I was really excited to be involved this time.

Here’s my brother. Isn’t he funny-looking?

The film was Black Swan. Guests (including my brother Niall and Ellie) arrived dressed to the nines and were offered a glass of bubbly on arrival in an elegant room, complete with modern furniture, monochrome decoration and hors d’ouevres. After a short while, two characters from the film, played by actors, held a speech from the film and the audience was then led through a maze of back rooms, stairs, corridors and rehearsal spaces, all filled and pulsing with angry dancers and stage managers, and drenched in red light. The audience then arrived on the stage, amidst practicing ballerinas, and went to find their seats before the film began.

Hacked Off Films presents Black Swan from The Preview Show on Vimeo.

You can find HOFF here: